Working of a touch screen in mobile 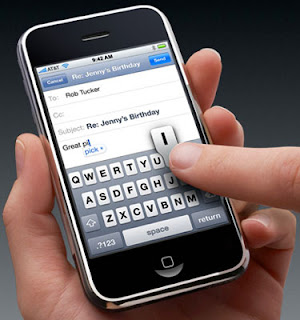 Touch Screen: Touch screens is a display that can detect human touch and recognizes the location of the contact and responds according to the software program it contains. Touch screen can be a single touch or multi touch and when i say touch screen you can touch the screen with your finger or stylus.

Why touch screen technology is in great demand?
Ans: Touch screens allow for a much more interactive and accessible experience. Input device such as a keyboard or a mouse slow an interactive process. A touch screen allows natural responses and better control to the user. It is far easier to reach a finger toward a screen than to search for the mouse or keyboard, figure out how to control or use it and give an accurate response and a better one would be touch screen are more fun to use. Ok so now we have some basic knowledge about the Touch screen so let' s begin on how does a touch screen of I phone work. I phone Touch screen Their are lot's of method which can be used to detect touch on the touch screen I phone's touch screen uses a capacitive material. In the capacitive system, a layer that stores electrical charge is placed on the glass panel of the monitor. When a user touches the monitor with his or her finger,The capacitive material sends raw touch-location data to the i Phone's processor. The processor uses its gesture-interpretation software to determine which gesture (A gesture is a form of non verbal communication in which visible bodily actions communicate particular messages) you made. It combines your physical movement with information about which application you were using and what the application was doing when you touched the screen.
Example: If you open the music list and then scroll through your music list and then select a particular file for playing then all this information is send to the gesture interpretation software and then approximately to the music player application which will carry the further processing as per your touch.

If the raw data doesn't match any applicable gestures or commands, the I Phone pays no attention to that touch.