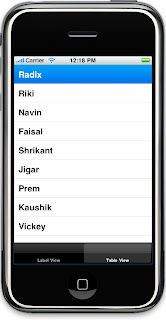 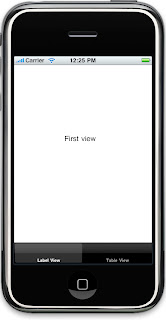 Some Extra data on TabbarController
1) Now in case you want to set the titles for your views you can go to the init method and add this piece of line
self.title = @"Label View";
This piece of code will set the title for your view and the string which you give will appear on the tabbar.
2) Now lets say you want to add an image to the tabbar this is again very easy all you have to do is add this piece of code in the init method
self.tabBarItem.image = [UIImage imageNamed:@"map.png"];
make sure that the image is present in your Groups & file in order to get this working
3) Their is a property of the tabbaritems called the badge value which will display a text on the right- upper corner of the tabbar in a red oval shape. You can show the badge value with the help of the following code using it in the init method
self.tabBarItem.badgeValue = @"R";
when you will run the application the application will show a red oval shape in the right corner which will look something like this 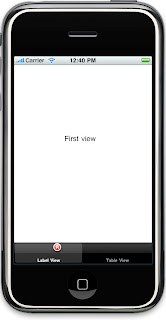 So this was about the UITabbarController, i hope this post was useful for you,
Happy iCoding and have a great Day.
If you have any questions feel free to post them in the comment section
Posted by Radix at Sunday, December 05, 2010