using core data to save data from app

In my earlier post I have tried to explain what core data is and in this post we will be seeing how to add data and retrieve data using the Core data framework and in my next post I will be showing how to use predicate and retrieve data.
Design Phase: I won’t be using any design for this app, instead i will write some code and display the output on the console, So I have used only the appDelegate files here.
Step 1: Open Xcode and select Windows based core data application template, see the image given below 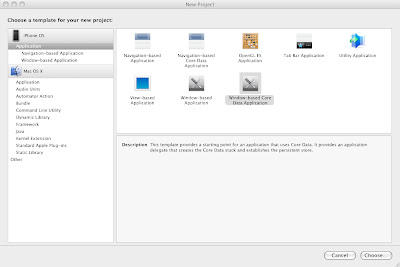 Once the above process is done you will see two files in your project those are yourProgramNameAppDelegate.h and yourProgramNameAppDelegate.m file. Now the best part about core data is that some piece of code will be added in your application which you don’t need to worry about.
If you open the AppDelegate.m file you will be able to see that piece of code, this piece of code says that “ I will be setting getter and setters for the properties written in the .h file of the app delegate and also will be creating a .SQLITE file in the document directory”, the sqlite file is created just once not every time.
Now just expand the resources group and what you will see is a file with the extension .xcdatamodel, select that file. Now you must be seeing a view which is exactly like the view in the image given below. 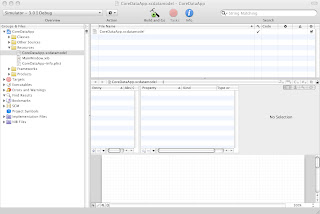 This is the interface provided by apple so that you can create some entities and gives the  relationship between them. For our demo I will be creating a parent and a child relationship with one key concept in mind i.e. “A parent can have multiple child but a child will have only one parent”.
Step 2: This step deals with creating entities, assigning attributes to them and assigning relations between them.
In the above picture you can see an entity tab and a add button which is at bottom, click it. Now you must see a pop-up with the name entity.
Inorder to assign name to this entity, select the entity tab. 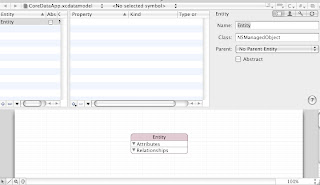 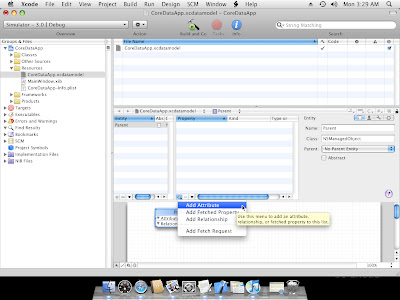 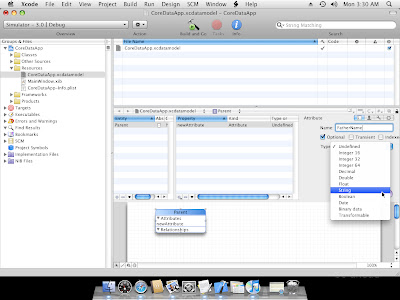 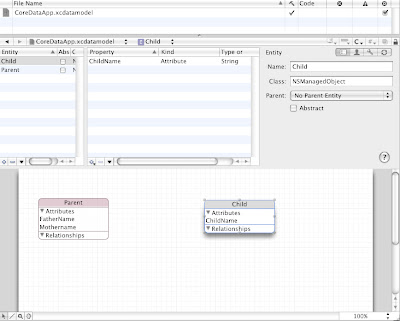 Now its time to give them relationships with the help of the line tool (see the above image at the bottom you must be seeing an arrow, a line, select the line form there).
So as said earlier a child will have only one parent but a parent may have multiple children, so in this case what we must do is  to use the line tool and make a single relationship between them and name that relationship as childToParent and specify the delete rule for that as well, I have specified the delete rule as cascade. Make sure that you start the line from child to parent 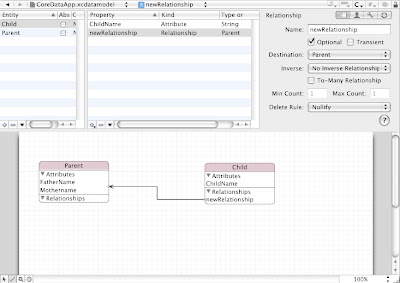 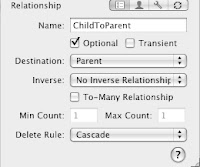 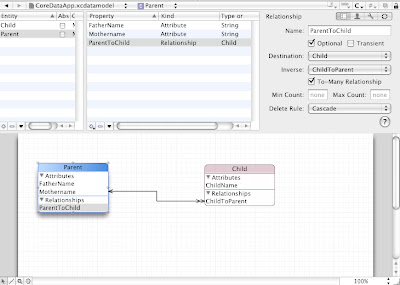 It’s time to add the managed object files for the relationships that you made so far, for that you have to select the entire entity(Parent and Child) and then select the xcode project file from your application (This is the blue file that appears on the top) here’s a snapshot to guide you. 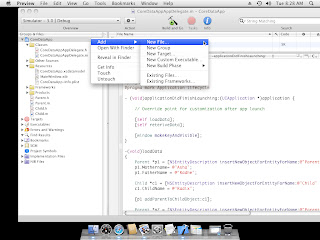 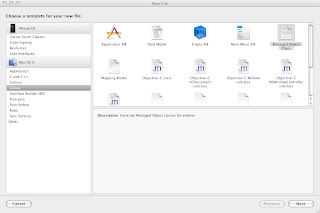 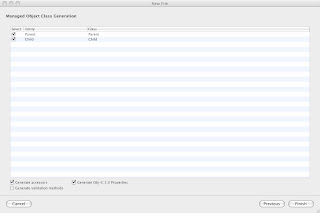 and then click finish once this process is done xcode will add four new files in your project and the name of those files are Parent.h, Parent.m and Child.h and Child.m.


As said earlier in core data we manipulate the entities with the help of objects,these files are called as Managed object files and when they will be added in your application it will look some what like this

Now its time to do some actual coding


Step 3: Select the appdelegate.h file and add two functions with the name


Code Explanation: In the above code i am adding values to the parent and child class and saving them into the database. The line

says that you want to see the data associated with the parent entity, so you can see fetch request as a class which will hold your query and its upto you to execute that query using managedobjectContext instance method called executeRequest, now when this method will be executed it will give you an array of data. Hence i have stored the result in a mutable array (You may also take NSArray) and applied a for loop and printed some data on the console.

Step 4: Make sure you call both the methods in the method given below of you appdelegate.m file

Step 5: Once you see the above output make very sure that you comment the line
[self loadData];


else the data will be loaded twice in the database and you will see the following output.

I hope this post helped you in clearing some concepts regarding Core data in my next tutorial i will explain how to use predicate and fetch data. Feel free to comment or request a tutorial, until then Happy iCoding and have a great Day.
Posted by Radix at Monday, February 28, 2011