The graph API is a powerful set of various apis provided by facebook which helps us in carrying out all the task through a hand held device which we normally do when we are logged in to facebook from a web browser. All the response provided by the graph api is in JSON format.

You can read all about the graph api by visiting this link.

Step 1: Create a view based application using xcode which has one UIButton and UITextField on the view, when the user will touches this button the user will see the facebook pop up where he will enter his credentials and post data on his wall. 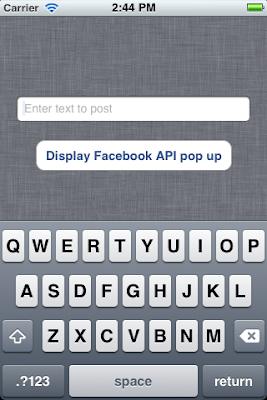 I have modified the graph api which i previously downloaded from the given link since it was giving me some crash, also the demo which is available for download is in ARC version.

Step 3: Import the fbgraph into your viewcontroller file, when the user logs in by entering his credential in the graph api pop up their's  a method that will be called by the graph api, this method is no delegate method but its the custom method that you can write yourself.

Code Explanation: Above code is self explanatory i am initializing the graph api with the application ID that i created the steps for which are mentioned here.

The method authenticateUserWithCallBackObject:andExtendendPermission will call one method which you can define in the .h file and this method will be called only after the a valid credentials are entered.

Extended permission: When a user authenticates your application by default has the ability to read only the user's basic info and if you want additional permission then you need to add them here.

Step 4: Using the FBGraphResponse method I will be able to know what the response from the facebook server is. Generally the response is the basic information about the user who has entered his credentials in the graph api pop up.

Note: Maximum of the facebook api work on the access token that is provided to you when you login using the graph api, you can only post data and do stuff with the graph api if your access token is valid and if not then you will receive a server error message from facebook.

By using the doGraphGet method you can get the data of the user and by using the method doGraphPost you can post the data on the users wall.

Step 5: Now we are all set so let’s run the application and push data on our facebook wall. Select the app delegate.m file import your view controller and
add the view controllers view to the iphone window. 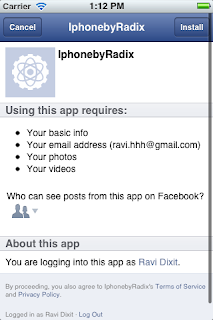 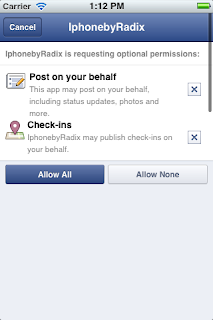 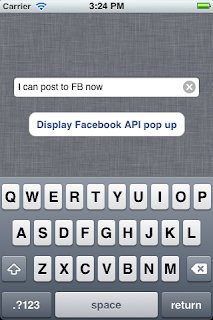 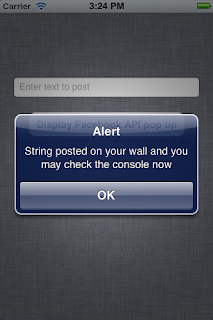 In case if you are having any queries then kindly mail me up or enter it via comments.

Until then happy iCoding and have a great day.
Posted by Radix at Wednesday, August 22, 2012