Writing your own SOAP based web service for iPhone Part 2

In this tutorial we will have a look at the pending part for creating a web service.

Note for iOS developers: Web services are nothing but methods that we declare and implement in our .h and .m files the only difference is that they act as a media to pull the data from the server and present it in a particular format. JSON is nothing but a string representation of the data that you pull from a server.

For our first step we will have a look at simple web service which would accept a parameter from the user and return the data entered by the user in JSON.

Select the .cs file of the web service and just add a function to print the data entered by the user, for this you should know the syntax of C# and I am sure if you have a look at the syntax for creating function then it would be a piece of cake. 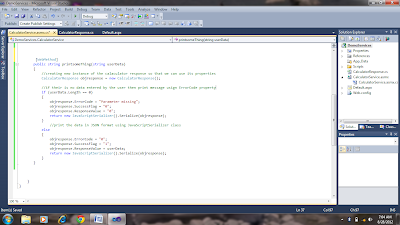 In the second line of code I am having a check whether the user has entered some data or not and If not then in that case what I am doing is with the help of the properties in the response class I am notifying the user that something is pending.

Note: In C# the properties can be accessed with the help of the DOT operator. 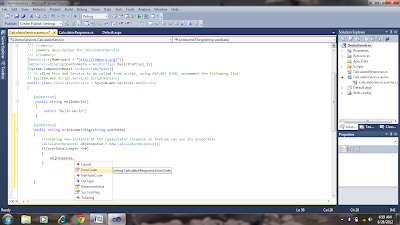 If the user has entered the required filed data then the code knows what to do and will throw the JSON response accordingly filling in all the properties from the response class and displaying the appropriate data to the user.

The final step is to convert the output in JSON format and to do this I am using the JavaScriptSerializer class which has a unique method named Serialize to convert an object in JSON format as per the data given in the object. So again cheers to dot net and Microsoft for such beautiful function.

Note: The concept is pretty much straight forward:

-    Whatever data has been entered by the user goes through the validation code.
-    If there are no issues in the validations I proceed with my normal execution.

-    During the execution process I fill in the properties of the response class so that later I can encapsulate them in JSON string.

-    Encapsulation of the JSON string is done with the help of JavaScriptSerializer class Serialize method which comes from the framework using System.Web.Script.Serialization.

The last task is to run the web service and this is done with the help of a small play button that you can see above, asp.net will automatically create a new development server for your application and will run your application. 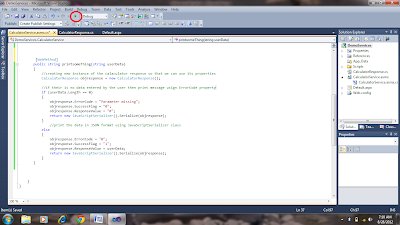 When you hit the run button you will see a small pop up indicating that the ASP.NET has loaded your application in its default development server which is used by the  dot net developers for testing the code that they have wrote. 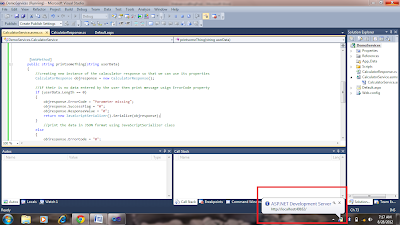 After running the application you will see that the application will get loaded in your default web browser (Chrome or Safari etc) and will look something like the one given in the below image. 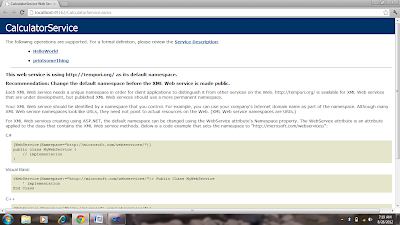 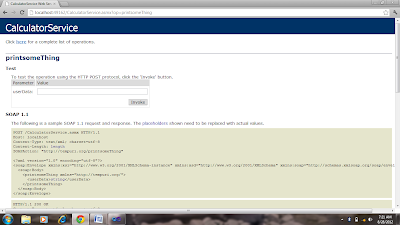 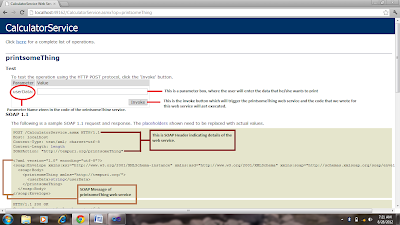 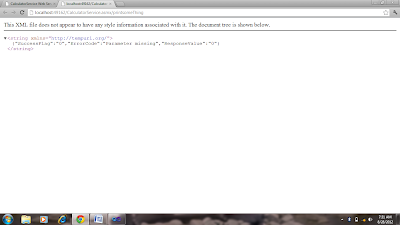 Response Explanation: As you can see from the response you have an ErrorCode which is screaming that you have forgot to enter some data inside the parameter box and all the other response flags are 0 since they don’t have any data to display.

Now let’s try to hit the web service by entering some data in the parameter box. 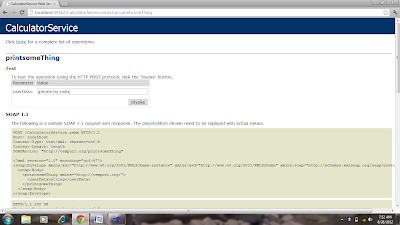 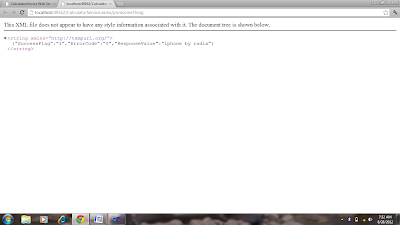 Response Explanation: As you can see now the response seems to be bit different from the earlier response, SuccessFlag is 1 which means that the code has executed successfully and we have the response value filled with the data that the user has entered in the parameter box.

So as you can see how simple the entire scenario was, similarly you can prepare the code for your calculator service as well.

Given here is the updated code copy of this project with basic calculator functions, and given below is the snap shot for the same. 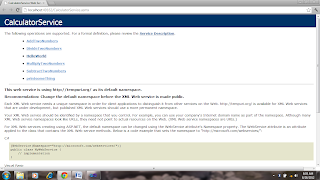 If you want to know how to call these services from iphone when they are successfully hosted in any web server then you can refer this tutorial of mine which I wrote earlier and if you are having any sort of queries then do let me know via mails or via comments.

Until then Happy iCoding and have a great day.
Posted by Radix at Tuesday, August 28, 2012